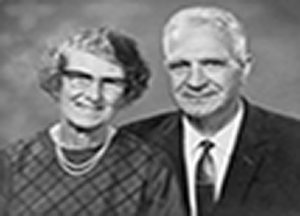 PASTOR JAMES MCKEOWN HIS EARLY LIFE:
Rev. James Mckeown was born on September 12th, 1900, at Ballymena in Northern Ireland to his Irish parents, William John Mckeown and Elizabeth Thompson. He was brought up in a Christian home. He knew his Bible and even liked the idea of becoming a minister when he grew up.

CONVERSION:
At the age of nineteen, he became converted through the ministry of Rev. Robert Mercer. Rev. George Jeffreys of the Elim Four Square Gospel Alliance in Ballymena, baptized James and Sophia, who later became his wife. He received his Holy Spirit baptism later. Rev James Mckeown left school at the age of eleven. Sophia however, got educated to the advanced age of nineteen and studied dressmaking for two years becoming a fully qualified seamstress. Rev. James assisted his father on the farm and later became a tram driver, when an inspector on Glasgow’s tram put James’ name forward.
MARRIAGE:
He got married to Sophia Kennock, in 1927. Sophia was attracted to James because of his praying habit. She said, she never heard anyone pray like that before.

CALL TO MINISTRY:
At an Elim meeting, at which both James and Sophia were present, there was a prophecy that someone from that group would go to Africa.
Rev. James came into contact with the Apostolic whilst at Glasgow. At a large Apostolic convention in England, it was specifically prophesied that James and Sophia should go to West Africa as Missionaries. Both James and Sophia were not present at the convention. The executive finally informed him about the prophecy. However , like Moses, he looked into himself and realized his weaknesses. He refused the call chiefly because of his inadequate formal training. Fifteen months went by before he accepted the call when he could no longer contain the persistent cries of Sophia, urging him to do so. James left the United Kingdom for the then Gold Coast on a boat in February 1937. On March 4th, 1937, Rev. James arrived in the then Gold Coast to begin work as resident missionary of the Apostolic Church of Bradford.

VISION:
Rev. James Mckeown’s vision was to help establish the Church and announce the good news of God’s Kingdom and to be a living testimony to the people about the power of God.

WHO WAS REV. MCKEOWN?
He was an honest, gently, affable and respected man of God. As a condiment and skillful leader, he combined humility with firmness to nurture the Church of Pentecost to the height of success. As a man of action, Rev. James personally took part in manual work undertaken by the Church. For example, he was actively involved in the construction of the first Mission house at Asamankese. Such display of humility and service characterized his ministry to the extent that the people among whom he worked emulated his example. He lived as an African in very many ways. Earlier in his ministry, when development projects had not reached the rural areas, he drunk from the typical African well dug out for him by the members. His ministry also involved extensive trekking on foot and across streams and rivers.

By his wisdom granted by God, he chose a band of selfless disciples who pioneered the Church from hard times to the present glorious day. Rev. James always insisted on self-reliance as against soliciting for financial assistance from abroad. In early 1982, Rev. James decided to hand over the mantle of leadership to an African minister. He explained that age was having a telling effect on him and that it was time he tired. So on the tenth of October 1982, he inducted into office, Rev. F. S. Sarfo (deceased). He later left the shores of the country for the U.K. from where he was fed with reports on the progress of the church. In 1984, Rev. James paid his last visit to the country. Within this time he officiated the sod-cutting ceremony of the extension work at the Church’s headquarters in Accra. Soon after that visit he left for good, never to return. Said he, at the time of his visit, “you are witnesses that my hands are clean” On May 4th 1989, he was called to eternal rest at his home in Ballymena, Northern Ireland. 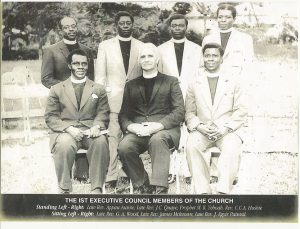